I recently received a new letter from Kigongo. It was heartwarming to know how he responded to “In the future I hope to visit” as ‘my sponsor’. Who knows, it might happen someday.

Kigongo has big dreams and I hope and pray they work out for him. He says he wants attend the university and to be a doctor when he grows up.

Here’s a picture Kigongo drew in his letter to me. 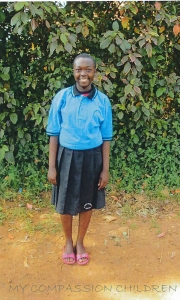 Just received a letter from Kigongo and what a joy to look at this picture he drew for me! 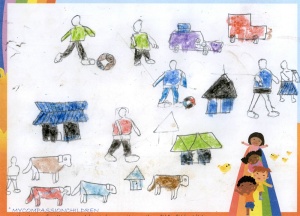 I love these special valentines!!!

I recently received another sweet letter from Hasimat I have a special love for all the children I support, but a special relationship seems to be growing with Hasimat because of her communications with me. Her last letter was dated November 17, 2014, but because of the mail transportation system and additional processing it only arrived to my address this past week. Because of the letters I receive, I am learning so much about other countries. Before I started sponsoring children in Uganda, I was not aware that a child might actually be responding to me in the English language.* Well, Hasimat does, and her printing is very neat and beautiful. I am so impressed with how much she writes and the details she gives me. In her last letter, she informed me of how well she is doing in school. She told me she is working really hard, and that her friends “are good friends and hard working” girls. She let me know that in Math she and her friends are learning about pie charts, English similies and in Social Studies about the East African community. She said that her favorite subjects are English and Math.

She continued on to tell me how she helps her mother at home with washing clothes, fetching water, cooking food and washing plates. At the Compassion-sponsored center, she is learning the “word of God” and she stated that they “feed well”.

She told me about her family’s Christmas plans which included her mother carrying sugar, soap, clothes and bread to the village where Hasimat would then be going to spend Christmas.

She also included a Bible verse for me found in Psalms 121:2.

Hasimat ended with the following –

“I WISH YOU A MERRY CHRISTMAS AND A HAPPY NEW YEAR. MAY GOD BLESS YOU AND YOUR FAMILY.”

* This caused me to do research on the languages of Uganda.

Uganda is a home to many tribes that speak different languages. Uganda has 56 tribes and about nine indigenous communities that formally came to be recognized in the 1995 constitution amendment of 2005. English is the official language of Uganda. Luganda and Swahili also widely spoken in most parts of the country. With the increasing Asian population, most Asian languages are spoken, there is also French, Arabic and Germany mainly in institutions where they are taught and at embassies.

The official language is English. Luganda, a central language, is widely spoken across the country, and multiple other languages are also spoken including Runyoro, Runyankole Rukiga, Langi and many others.

Uganda’s official languge is English, which is spoken by most educated Ugandans. The three major indigenous language families are Bantu, Central Sudanic, and Nilotic. Swahili and Luganda are also widely spoken.

When choosing a child to support, there are no wrong choices. Each child needs someone to care enough to sponsor them through our gifts and communications to them. When I peruse through the potential children to support on Compassion’s website, there are so many cute little ones. Each young child certainly needs a sponsor. What I am appealing to today are the older ones, perhaps the not so lovely in pictures. These children won’t need our support for as many years in the future, but they need our help as much or perhaps more than the youngest children. Two of the nine children whom I support are at least fifteen years old. These two girls are the ones that are best able to send me letters which have always been very heartfelt. One lives in Haiti and one lives in Uganda. Because they require no assistance in writing their letters (except for translation), I have been able to get to know their own thoughts and have gotten to know them better than the younger ones whom I support. Each girl tells me that they pray for me and my family. They tell me their dreams and they tell me how thankful they are for me and my support.

So if you are considering supporting a child, whether it is your first or next child, please consider the older children. They need us too.

Favorite Song – To the River

After deciding to sponsor Fredeline in December 2013, when the new year arrived I was so excited about sponsoring her that I wanted to do more. During the January timeframe, I chose three additional children from Haiti – first Chalanda, then Anne, then Anold. After choosing the four in Haiti, I must have been making up for lost time because the next month I decided to begin considering children in Africa. I started questioning myself as to how many children I felt I could comfortably sponsor now. I say ‘comfortably’ because a commitment to these children is a big responsibility. These children get so excited when they are chosen by a sponsor, and it is up to each sponsor to live up to his/her end of the deal. I knew I could do more. So in February I chose Rosine and Akoete, both from Togo, and Emeliya from Ethiopia. Then in March, I chose the final two – for now – Hasimat and Kigongo, both from Uganda.

These are the nine precious children I have chosen to support in my role as sponsor. I am happy with my decision to do this, and I only wish I had done it sooner!

I am a wife, mother, writer, photographer, artist, and past IT professional who wants to make a difference in these children's lives.

If someone has enough money to live well and sees a brother or sister in need but shows no COMPASSION—how can God’s love be in that person? 1 John 3:17 (NLT)

In order to respect the children's privacy, ACTUAL NAMES ARE NEVER USED in this blog.

© MyCompassionChildren.com, [2014-16]. Unauthorized use and/or duplication of this material without express and written permission from this blog’s author and/or owner is strictly prohibited. Excerpts and links may be used, provided that full and clear credit is given to MyCompassionChildren.com with appropriate and specific direction to the original content.